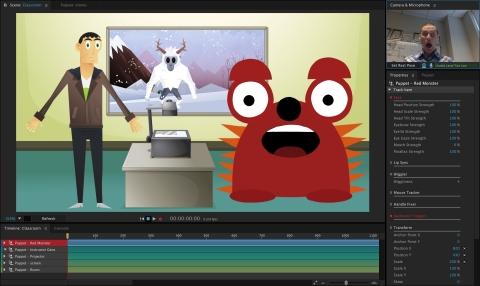 SAN JOSE, Calif.–(BUSINESS WIRE)–At the National Association of Broadcasters (NAB) Show, Adobe (Nasdaq:ADBE) is showcasing advances to its complete lineup of video technologies and services that radically improve how broadcasters, filmmakers and video professionals create, collaborate, deliver and monetize content across multiple screens. NAB will mark the first public preview of major updates to Adobe Creative Cloud video tools, including a revolutionary new color panel in Adobe Premiere Pro CC for instant color corrections and Morph Cut, which easily removes unwanted pauses and jump cuts for a more polished edit sequence as well as new Adobe Character Animator capabilities for Adobe After Effects CC that bring two-dimensional characters to life. In addition, the company is previewing Project “Candy,” a mobile CC Capture app, which is the latest addition to the growing set of Create Cloud enabled mobile apps. It is connected to a user’s Creative Cloud Profile and therefore lets anyone using their smartphone camera capture amazing production quality lighting schemes and then apply them to video footage in Premiere Pro CC.

Innovations like these are driving rapid adoption of the company’s video workflows: recent Premiere Pro converts include the four-time Academy Award winning Coen Brothers, who are currently editing their film, Hail, Caesar!; and director Rhys Thomas and producer Lorne Michaels of Saturday Night Live, with Staten Island Summer, due out in 2015. In addition, MLB Network switched their editing and post-production environment to a complete Creative Cloud workflow.

At NAB, Adobe is announcing significant enhancements to Adobe Primetime, which has emerged as the global leader in powering TV content across screens including over-the-top (OTT) devices such as Apple TV® and Roku®. Specifically, Adobe is unveiling innovations in video delivery, monetization and personalization to enable new OTT business models for content owners, programmers and pay-TV providers. The company is partnering with service solution providers, including industry pioneer MLBAM, to offer innovative OTT programming for live, linear and video-on-demand services across TVs and screens everywhere. Adobe is working with MLBAM to power live streaming of the Major League Baseball season, providing playback and delivery capabilities for all games. Also, several of MLBAM’s sports, news and entertainment partners have introduced the first direct-to-consumer TV apps leveraging Adobe Primetime technologies. Additionally, Turner Broadcasting is using Adobe Primetime for ad insertion on Apple TV and other OTT devices.

Adobe is also previewing a new configuration for Adobe Anywhere, a collaborative workflow platform that enables distributed teams using products such as Premiere Pro CC and Adobe Prelude CC to work together — utilizing centralized media and shared projects to efficiently shoot, log, edit and finish video productions. Adobe will demonstrate its new solutions at its booth #SL5110, South Hall in the Las Vegas Convention Center April 13 – 16. Adobe professional video and broadcast tools will also be presented at over 100 partner booths throughout the NAB exhibition.

Unveiling the Next Wave of Innovation in Adobe Creative Cloud

Adobe will soon release significant updates to the video tools and technologies that are a key component of Creative Cloud. Key innovations include:

More and more consumers are watching live and on-demand TV on tablets, smartphones, OTT and other devices. According to the latest Adobe Digital Index data, 13 million viewers accessed their favorite TV Everywhere content quarterly last year, more than twice as many as in 2013. The growth across OTT devices is even more impressive with the number of viewers watching premium video increasing by 350 percent year over year. To help broadcasters and pay-TV providers scale video delivery across screens with closed captioning, robust content protection, and ad insertion instantly across TV apps and operating systems, Adobe is introducing the latest version of Adobe Primetime. The platform is able to authenticate 2.25 million viewers per minute, three times more than just a year ago, and deliver dramatic performance improvements with videos launching instantly – up to four times faster than before. Additionally, Adobe Primetime now supports all major third-party DRM technologies to address the challenge of content protection in closed playback environments.

“From planning to playback, Adobe is delivering advanced workflows for every step of the creative journey. The industry is switching to Premiere Pro CC and our tightly integrated set of video tools because of the constant stream of innovation coming from our labs. Our move to Creative Cloud, with deeply connected mobile-to-desktop workflows combined with continued innovation in Adobe Primetime ensures our customers have the tools and services to create, deliver and monetize stunning videos, TV shows, films and commercials across any screen faster than ever before.”

“Since MLB.TV was born as the internet’s first OTT product 13 years ago, we have remained focused on building reliable, highly engaging live TV viewing experiences at true broadcast scale. Adobe Primetime, with its support for DRM, the industry-standard authentication capability and robust HD video playback allows us to offer consistent video experiences across more than 400 devices, including the latest breed of OTT products.”

“This season At MLB Network, we are rolling out Adobe Premiere Pro as our editing platform for both HD Edit and desktop workstations. For the 2015 baseball season, we are deploying the Premiere Pro 2014 release, and we’re looking forward to taking advantage of the new features available in the next release of Premiere Pro. The enhancements within the new color tools, such as Lumetri support, and sharable CC Libraries, along with enhanced video scopes, are all appealing. We are also very interested in the advancements being made to help us work more efficiently with audio in Premiere Pro. The next release of Premiere Pro will be an excellent addition to our Creative Cloud solution.”

“Project Candy gives anyone involved in production and post a new way to think about and capture color. If you see light or color that inspires, simply capture it with Project Candy on your mobile device and sync the look with Creative Cloud automatically. The captured look can then be applied to shots as a starting point for color correction in Adobe Premiere Pro and other Adobe video applications. It’s an amazing tool that will inspire the way you think about color and that’s great for everyone.”

At NAB, Adobe is previewing the next major updates to Creative Cloud, Primetime and Adobe Anywhere. These updates are expected to ship in the coming months. The company is offering a special offer aimed at video professionals who switch to Adobe Creative Cloud, for US $29.99 a month for the first year. The offer is valid through May 29, 2015. For more information, visithttp://www.adobe.com/go/video.

Creative Cloud is transforming how creatives find inspiration and produce their best work — and the value of Creative Cloud is increasing all the time through product updates and new capabilities. A major update to Creative Cloud is expected in the coming months that will introduce new ways for creatives to connect their creativity across mobile and desktop, accelerate their productivity and work more efficiently.

Adobe is changing the world through digital experiences. For more information, visit www.adobe.com.